THE LOTUS FLOWER – POTENT SYMBOL OF FAITH AND BIOLOGICAL WONDER 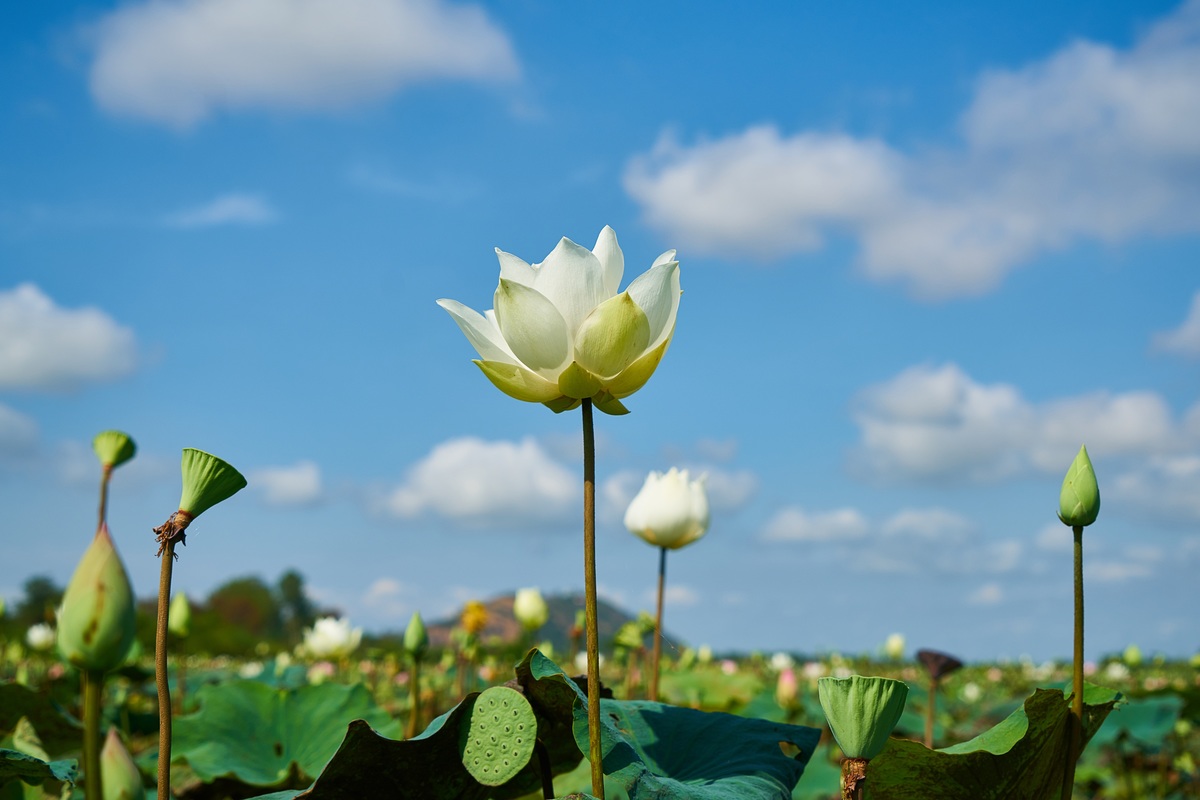 For millennia the lotus, has been a sacred flower in ancient Egyptian culture and religion, Hinduism and Buddhism, with a powerful symbolic resonance that is said to epitomise divine beauty - its unfolding petals suggestive of the expansion of the soul and the realisation of inner potential. In Buddhism the lotus represents purity of body and mind, and in the written and oral traditions the flower is synonymous with perfect elegance, beauty and grace.

Resplendent in its watery realm, this unique floral species with muddy roots, basks in the brilliant sunshine until nightfall when it dips beneath the water, only to reappear the following day, spotless and pristine – which, to those of a spiritual nature, suggests allegorical allusions to the cycle of life, rebirth and renewal, of enlightenment emerging from the depths of ignorance, of forgiveness and the progress of the soul.

In Buddhism, a white lotus is said to symbolize purity, whereas the yellow variety is associated with spiritual ascension. Many of Hinduism’s divinities are associated with the flower, the goddess Laxmi is often depicted seated atop a fully opened lotus flower, and Brahma, the god of creation is shown emerging from a lotus that appears from Vishnu’s naval.

According to Buddhist tradition the Buddha was said to have first appeared seated on a lotus flower and wherever he stepped lotus flowers bloomed. The lotus represents purity of mind and body and although rooted in the muddy depths the flower’s blossom rises above attachment and earthly desires, and water droplets slide easily off its petals, also considered symbolic of spiritual detachment from worldly ambitions. 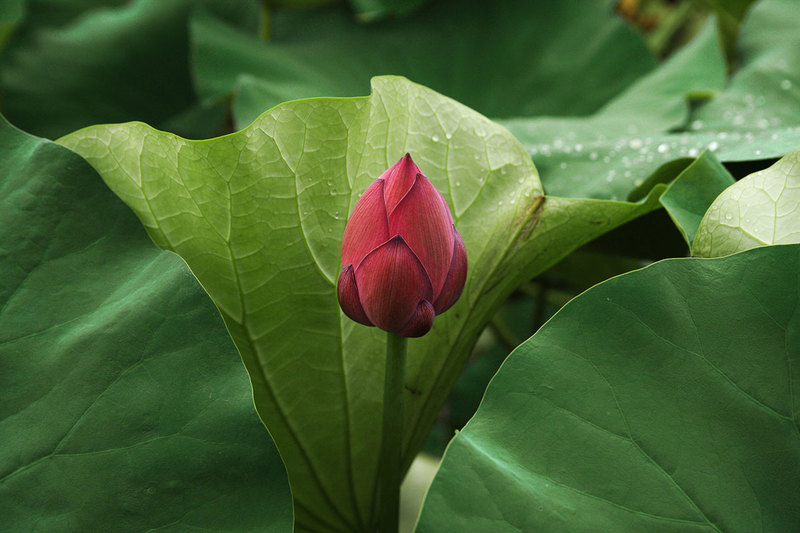 Scientific research conducted in the 1990s to study the lotus’ remarkable ability to repair itself and the possible implications this might have for human health showed that the plant produces a protein that is able to metabolise metals. Its water-repellent leaves keep the plant free of dirt and water droplets, to protect against microbial fungal and algal infection and the damaging effects of a fierce tropical sun. This so-called ‘Lotus Effect’ of the Nelumbo nuciferahave led to the creation of long-lasting, dirt-repelling products such as roofing tiles and exterior paints. 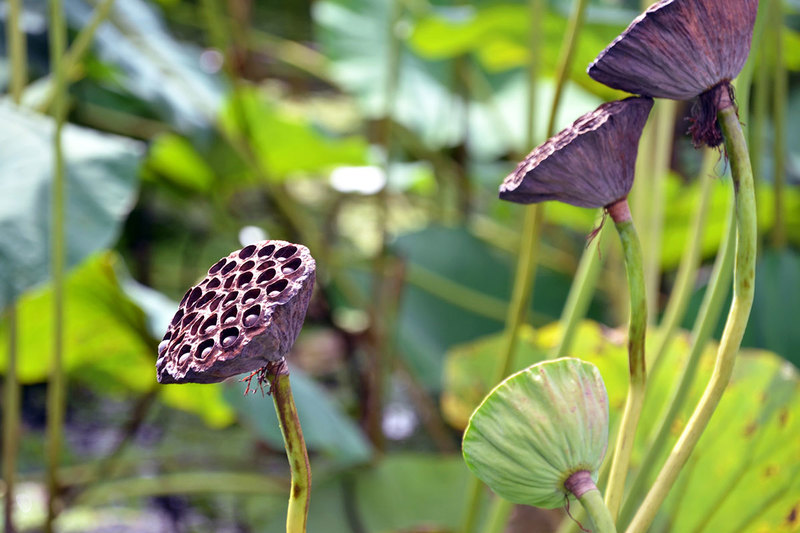 The fruit of the lotus has a waxy coating that contains antibiotics to protect the seeds contained within. It is also able to regulate the temperature of its flower, much as warm-blooded animals do, supposedly to attract insect pollinators, but probably the plant’s most intriguing attributes are its longevity and tenacity for life. Lotus plants can live for more than a thousand years and plants have been regenerated after centuries-long periods of stagnation, with new plants generated from their seeds.

In Thailand, the lotus is called bua, บัว, and the Thais, like all good Buddhists, hold the lotus in very high esteem, not only for its spiritual associations but also for its medicinal qualities. All parts of the flower are eaten and it is believed to aid blood circulation and improve digestion. Offerings of lotus flowers are made to Buddha images throughout the country in an act of accumulating merit but also in the hope that in doing so the giver may one day also achieve spiritual enlightenment. 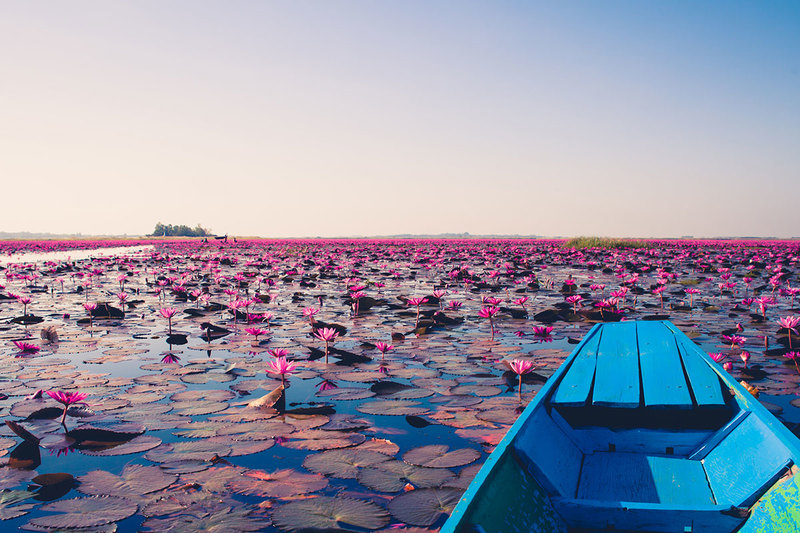 Probably the best place to see them in abundance is Talay Bua Daeng, ทะเลบัวแดง, the Red Lotus Sea (actually a lake), in Udon Thani in the northeastern Isan region. Millions of pinkish-red flowers stretch out across the lake like a carpet, with narrow channels through which small boats can pass. These boats with covered canopies to provide much-needed shade from the burning sun, can be rented cheaply and easily. There are a number of tiny islands in the lake, some of which house small shrines.

During the intense heat of the day the flowers tend to close up, so the best time for viewing is from sunrise till about 11 in the morning. This wetland paradise is also home to a thriving aquatic ecosystem and more than 80 species of birds.

The best time of year to visit is in January and February, though the blooms may last until March, after which the lake is largely devoid of colour. An annual flower festival, the Red Lotus Sea Festival, is held towards the middle of January at Wat Ban Diem, a temple right next to the lake. 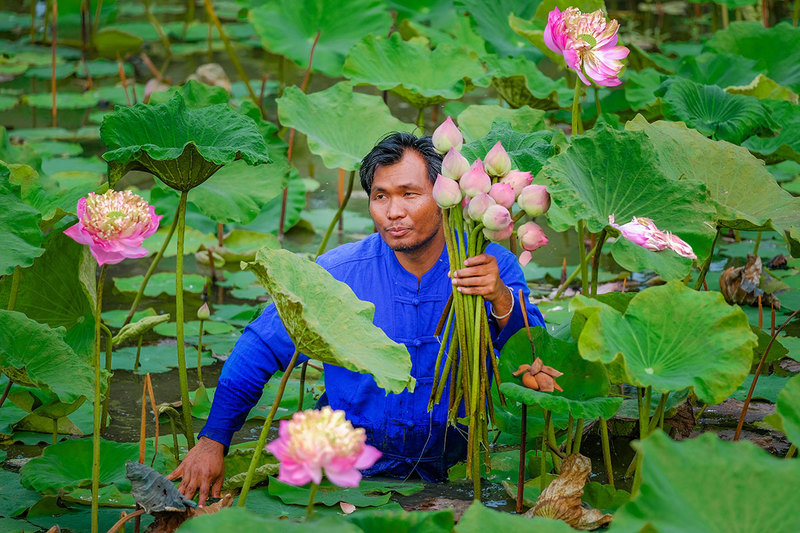 In Samut Prakan every October Buddhists stage Rub Bua, the presentation of lotus flowers on Ok Phansa, the day before the end of the three-month long Buddhist lent. Devotees bring lotus blossoms in a splendidly ornate, gilt boat procession along the Samrong canal to reach the Wat Bang Phli temple to give their offerings to Luang Phor Toh, the temple’s main Buddha statue. The ceremony was reputedly originally begun by people of Mon descent as a way of thanking the local Thai population for the kindness shown to them. The event has since become a major merit-making festival with a great many other activities also taking place.

It would seem that ancient wisdom and modern scientific investigation have both confirmed the lotus to be one of nature’s true marvels, a beguilingly beautiful plant with intriguing, regenerative genetics that may yet yield even more dramatic insights into the mysteries of longevity and well-being that could result in hugely beneficial outcomes for human health and lifespans in the future. 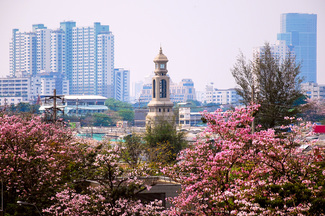 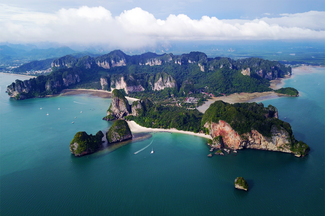 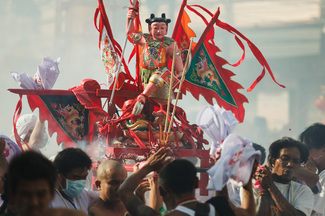